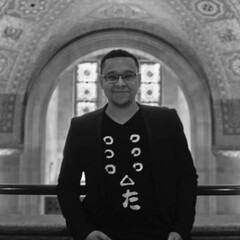 I've been drawing and writing about robots, aliens, and monsters, for about as long as I can remember.

While my skillset and toolset have increased, my enthusiasm to create and design worlds and tell unique stories within them has remained consistent.

In the past decade I have worked at companies such as Ubisoft, Digital Dimension, Rocket Science VFX, Jam Filled Animation, Little Blackstone Studios, as a matte painter, concept artist and 3D modeler.

Through Exocentric Productions, my independent film production company, I have written, produced, and directed short films such as The Carrier (Written/Directed/Produced), a full-length feature entitled Redshift (Written/Produced), and a short proof-of-concept short film entitled EXT (Written/Directed). In short whether its with a pencil, a stylus, or a camera, I am a visual storyteller at heart and I hope to work with others that share similar interests and passions.